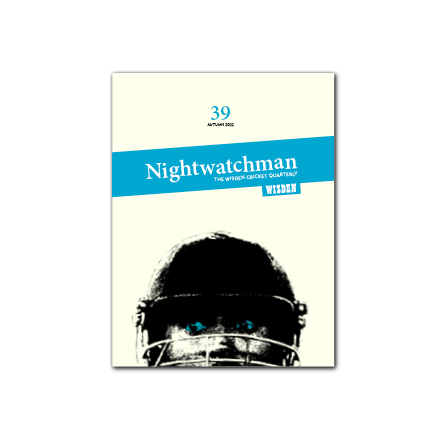 Issue 14 of The Nightwatchman is out now and available to buy here.

This edition contains the usual catholic mix of topics by a bonny selection of writers and photographers, some old friends and others, new voices.

Two overseas writers who spent time in the UK during their childhoods, Dileep Premachandran and Damian Broomhead, remember pivotal incidents from their own English summers. For Dileep, it was collecting Texaco Trophy cricket cards, cricket’s equivalent of the Panini sticker album, which existed for a brief moment in 1984 and will bring back happy memories for anyone who remembers tucking dog-eared corners into that cactus-green paper file. Damian recalls a ticketing ruse outside the gates of Lord’s and a kindness which brought him as close as he thought possible to his idols – until he wandered into a World Series dressing-room back home.

Marcus Leroux, who grew up in sectarian Northern Ireland, writes with poignant bluntness about his old team in Portadown, and the lost lives that passed through, that cricket alone was unable to save.

Looking for a gift for Father’s Day? Click here to check out our recommended gifts

As Charlotte Edwards steps into the shadows after her long innings at the top of the women’s game, Raf Nicholson makes a pertinent investigation into the differences between female and male leadership. And Simon Barnes and Alan Tyers tackle the universal experience of fear on the cricket field, whether fear of failure or of being hit by a small but very hard red ball.

Then we have Simon Wilde on Ranjitsinhji’s secret family, Lawrence Booth defending the art of the writers who aren’t former professionals (and conjoining a cracking new word while he’s at it), and Jonathan Liew on India’s rise and rise one golden summer twenty years ago. Bob Cattell, who has given many children such pleasure with his Glory Gardens series of cricket books, writes us a short story with a difference. There’s also poetry, history, bats, and some wonderful pictures from the MCC–Wisden photographs of the year reprinted in our middle section. There are plenty of hints on how to take a good picture there too.

Looking for a gift for Father’s Day? Click here to check out our recommended gifts