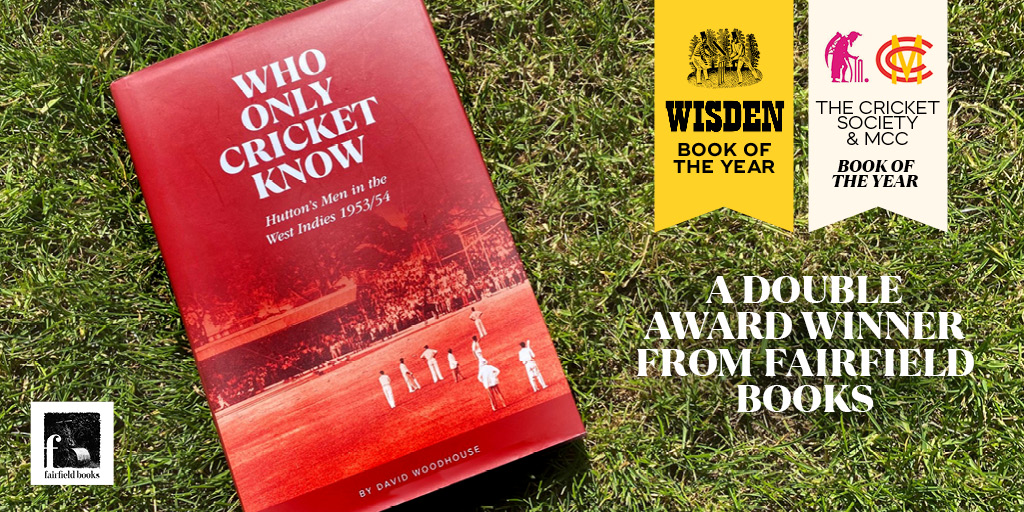 Who Only Cricket Know – Hutton’s men in the West Indies, written by David Woodhouse and published by Fairfield Books, has added the Wisden Book of the Year 2021 award to Cricket Society and MCC Book of the Year title it picked up at the start of the month. It has also been shortlisted for the 2022 Sports Book of the Year in the Cricket category.

The 1953/54 series, billed beforehand as ‘the world championship of cricket’, involved some of the greatest players of all time: as well as captain Len Hutton, the touring side included Denis Compton, Tom Graveney, Peter May, Trevor Bailey, Godfrey Evans, Jim Laker, Tony Lock, Brian Statham and Fred Trueman; for the hosts the ‘Three Ws’ – Frank Worrell, Everton Weekes, Clyde Walcott – and the ‘spin twins’ Ramadhin and Valentine were all in their pomp. One legendary West Indian figure, George Headley, made his final Test appearance and another, Garry Sobers, made his Test debut.

It is not often remembered that the original context of the famous question asked by CLR James which gives this book its title – ‘What do they know of cricket who only cricket know?’ – was his analysis of MCC tours to West Indies in the tempestuous period when the Caribbean islands were ‘in the full tide of the transition from colonialism to independence’. Whereas Hutton’s men thought they were victims of biased umpiring and hostile crowds fired up by ‘anti-British’ feeling, James believed their attitude typified a haughty and outdated ‘imperialist’ mindset.

Both sides seemed to be playing for ‘national prestige’, but this was a complicated thing at a moment of flux in British and Caribbean society. The English players were at least as traumatised by the desperation of settler-loyalists telling them that beating West Indies was a ‘matter of life and death’ as by the hostility of nationalists. They were supposed to be representing a ‘New Elizabethan’ spirit – just after the Coronation and the conquest of Everest – but the side was beset by frictions between northern and southern players, and between veterans of a more deferential age and ‘angry young men’ like Trueman.

David Woodhouse spent several years piecing Who Only Cricket Know together, drawing on player interviews, official scorebooks, contemporary newspaper reports and other eye-witness accounts to provide the first full-length historical account of this extraordinary tour, where a rollercoaster of a Test series was only half the story.

Praise for Who Only Cricket Know

Superb … Wide-ranging … Woodhouse gives full flavour to the complex issues of race and class, without which Caribbean cricket of the time cannot be understood … If you like cricket, the Caribbean and history then Who Only Cricket Know is a fine place to start.MIKE ATHERTON, THE TIMES

Gripping cricket, fascinating characters and a backcloth of Caribbean nations on the cusp of independence where issues of race and social class are never far from the surface, these are the ingredients of this most dramatic of tours. It needed a writer with a rare gift to weave it all together into a compelling but never simplistic read, and David Woodhouse undoubtedly has that gift. The book is a masterpiece.
STEPHEN CHALKE

Authoritative … While the English-centric record of events has always concentrated primarily on the “who said what to whom” and who was most to blame, Woodhouse aims for a far more balanced and expansive view, foregrounding Caribbean voices and revisiting complex and even contradictory characters … Seven years of research and writing allowed him to place the full gamut of detail within a rich social, racial and political history.
EMMA JOHN, THE GUARDIAN

A superb chronicle of an often overlooked chapter in cricketing history, written not only with a deep and intimate love of the game but a rare social and cultural perspective.
JONATHAN LIEW, GUARDIAN SPORTSWRITER

The characters and the plot … make for a fascinating tale. But Woodhouse achieves far more than the standard tour book by placing the series in its historical context in a scholarly, yet accessible way. Who Only Cricket Know is a tour de force, and Wisden’s Book of the Year.
VIC MARKS, WISDEN CRICKETERS’ ALMANACK 2022

David Woodhouse’s account of Len Hutton’s tour of the Caribbean in 1953/54 is a beautifully told and important story of cricket and politics, unavoidably and fascinatingly mixed, with echoes that reverberate as much today as they did nearly 70 years ago, perhaps more so.
SIR TIM RICE

A masterful retelling of an historic tour and so much more besides. Woodhouse brings alive the time, the characters and the matches with great skill and flair.
DEAN WILSON, DAILY MIRROR CRICKET CORRESPONDENT

A wonderful story, very smartly told. Proof of the old saying that there is nothing as new as the history we do not know.
ROBERT WINDER, MCC/CRICKET SOCIETY BOOK OF THE YEAR CHAIR OF JUDGES