Click the cover to read a sample of issue 40

The Day Everything Changed

Ever wondered what it’s like to lift a World Cup?

The summer started badly for me. I’d had a niggly foot during our pre-season trip to Abu Dhabi and the scan came back with a bone in my foot lit up like a Christmas tree. Not good. All I heard on the phone to our physio was “stress fracture”, at which point I checked out. My mind began to catastrophise. That’s it. Dream over. I’d miss my one shot at lifting a World Cup on home soil. Dragging me from my thoughts, our physio tried to reassure me. If all went well, we could still find a way to manage me through it; oh, and by the way, the moon boot and crutches are in the post. The next month was torturous. I’m a pretty level person, but being injured can push any cricketer to the edge. Watching the girls going about their prep at Loughborough, hopping around the boundary and spending my time in the gym on the ‘arm bike’ – a God-awful machine that tests your ability to withstand lactic acid in your triceps – wasn’t my idea of fun.

I had the biggest tournament of my life coming up and I couldn’t prepare how I wanted to. My foot began to heal, but as the injury clouds cleared, I had a bigger problem: I couldn’t buy a run. I played in a few practice games and didn’t pass 10. My footwork felt slow and my timing had deserted me. Everything felt wrong. I hit more and more balls in the nets but just couldn’t get my timing back. What was going on? I’d felt in fine fettle all winter, but now I was falling down the slippery slope into poor form and starting to doubt myself. Two weeks before the start of the World Cup, I was sent to play purely as a batter in a warm-up match for Loughborough Lightning against Sri Lanka. I inelegantly misjudged a straight off-break hitting middle stump. Second-ball duck, thanks for coming. I slipped a little deeper.

Outwardly, I tried to appear relaxed, the group was in such a positive space and we’d built such belief. Inwardly, stress levels were high. Was I losing my cool? Was the pressure getting to me? How am I going to score any runs in this tournament? I arranged to meet our sports psychologist at the time, Mike Rotheram, in our hotel in Chesterfield. I’d been bottling it all up, even to the people closest to me. I had to talk it through with someone. I don’t find it the easiest expressing my emotions, but I told him how I was feeling, about the pressure I was putting on myself and the worry about where my next runs were going to come from. Getting it all out there helped. Mike reminded me when I’m at my best with the bat. He spoke about the calm energy I have, and how I’m always looking to score. We had a practice game the next day. I resolved to not worry about the outcome and focus on taking the game on. After a streaky start, something clicked and I was back. Suddenly, batting felt natural again. I made it to three figures and felt a weight off my shoulders. There and then, I promised myself that whatever happened during the tournament, I had to give myself a break. I vowed to embrace everything that would be thrown at me. This was a once-in-a-lifetime chance; all the more reason to confront it in the manner I wanted to. Our coach Mark Robinson bought the team a round of Mr Whippys from an ice cream van at the side of the ground and into the tournament we went.

It was a strange start, not least because the security staff at Derby wouldn’t let us into the ground. The batters travelled in an early minibus and they were expecting a coach, so they assumed we were a bunch of fans in full kit! Our assistant coach Ali Maiden, the resident minibus DJ, was blaring out Baddiel & Skinner, which probably didn’t help. And we lost. We’d been a bit shellshocked by some aggressive strokeplay from Smriti Mandhana at the start of India’s innings and we struggled to get their spinners away. I remember having a conversation with Robbo before going to speak to the girls. We agreed to keep things quite positive, we both knew we’d been a bit overawed by the occasion, but we decided it was best to brush past that and focus on the next game. We got back on track with a big win against Pakistan at Leicester with both Nat Sciver and myself scoring our first ODI tons in the space of a few balls. That was special. We were into the tournament. Now we needed to get on a roll. A few days later we won a close game against the Aussies. After that one I really thought we would win it. We had so many different people performing and winning those big moments in tight games, it meant our confidence as a team was sky high. The day had begun with Robbo dropping his trousers believing that he had a pair of training shorts on underneath, only to realise that they were non-existent and having to scramble around pulling them up! It must have been another of Robbo’s psychological masterplans to defuse any tensions…

At certain moments it hit me that things were different now, that women’s cricket was changing. One of those came after our penultimate group game against New Zealand where Tammy Beaumont and Nat scored brilliant hundreds and the ‘Natmeg’ – a shot that sends the ball between her legs – was born. Joe Root was doing an interview the next day and he was asked what he thought of it. As female cricketers we’re often asked about the men’s game; to see it the other way around felt significant. The greater spotlight was something new for all of us. Leading into the summer, there were some massive billboards of the captains to promote the tournament, including one at my local tube station. I was mortified when I had to get the train into town – sunnies on every time. It wasn’t something I was used to or comfortable with. After winning our remaining games to top the group, we just had South Africa blocking our path to Lord’s. There were a few nerves around before the semi and I tasked Katherine Brunt with the job of getting everyone to crack a smile. She’s a big Eminem fan and had started doing the odd funny rap in training and calling herself Kathy B. So I asked her to rap in the huddle. It was hilarious, and had the desired effect on everyone as we ran onto the field, although I regretted it slightly as Katherine’s adrenaline-fuelled first over wasn’t her finest. The conclusion to that match was the most tortuous feeling of my life. Sitting on the balcony, having swept a rank full toss straight to the fielder, I watched as our hopes hung on a tricky chase we were messing up. Sarah Taylor and Tammy were singing to try and ease the tension – I think it intensified mine – and Alex Hartley was asking everyone’s opinion on whether or not to wear a thigh pad. Somehow Jenny Gunn and Anya Shrubsole held their nerve, and when Anya struck the winning boundary with two balls remaining, the balcony erupted. Our much-loved doctor Tham jumped up and fell down a set of stairs. Luckily no medical assistance was required.

And so to Lord’s, July 23, 2017. The day our lives changed forever. As I stood there about to sing the national anthem, leading my country on home soil at a World Cup final in front of a full house, I looked up to the big screen to see the face of Rachael Heyhoe Flint, who was no longer with us. I scanned the crowd to find Eileen Ash, 105 years young, who had earlier rung the Lord’s bell. In those moments I felt the true enormity of the day. What depths of gratitude we owed the women who had fought for us to be there. Today was for them too. We posted a slightly under-par 228 and things were looking bleak with India 191-3 in the chase. Look at those figures now and it’s hard to fathom what happened next, but in the heat of battle it genuinely felt like we were always in the game. Every little decision, every conversation, all felt critical. In a weird way that made things easier: keep calm, give clarity and trust my bowlers. With the game slipping away I had a decision to make. Which of the big two of Shrubsole or Brunt do I bring back? I went with Anya, planning on giving her a couple of overs before going back to Katherine. First ball: four. Second ball: four. Bugger. But Anya had a steely look in her eyes. A few balls later she picked up the key wicket of the set Punam Raut. I didn’t need to say much, just keep her going and see what happens… What followed was the best spell I’ve ever seen, as she charged through that Indian tail and wrestled the game back for us. Despite one of the most dramatic, dropped dollies in the history of the game when they were nine down, Anya was good enough to nail that final wicket with her very next ball. The elation in that moment was unlike anything I’ve ever felt and probably will ever feel again.

The moments in the dressing room afterwards are those that will stay with me the longest. Singing our team song and reminiscing with everyone on the balcony having achieved what we set out to do was unbelievably special. As I looked out from that historic balcony, I thought how we’d cemented our spot in the game’s history. There were the remnants of times gone past scattered throughout the day, even the old male member in the pavilion who sanctimoniously told me immediately after the toss, “You should have bowled first dear!”. You could feel the ghosts of the women who had fought to bring us this chance. That day we walked in their footsteps, and it belonged to all of us. A new dawn, a new era. Women’s cricket had arrived.

This article is an extract from Golden Summers, a book produced by the team behind the Nightwatchman and WCM. Golden Summers comprises 50 personal recollections from an array of authors, musicians, comedians and former players, documenting 50 different seasons between 1934 and 2020. 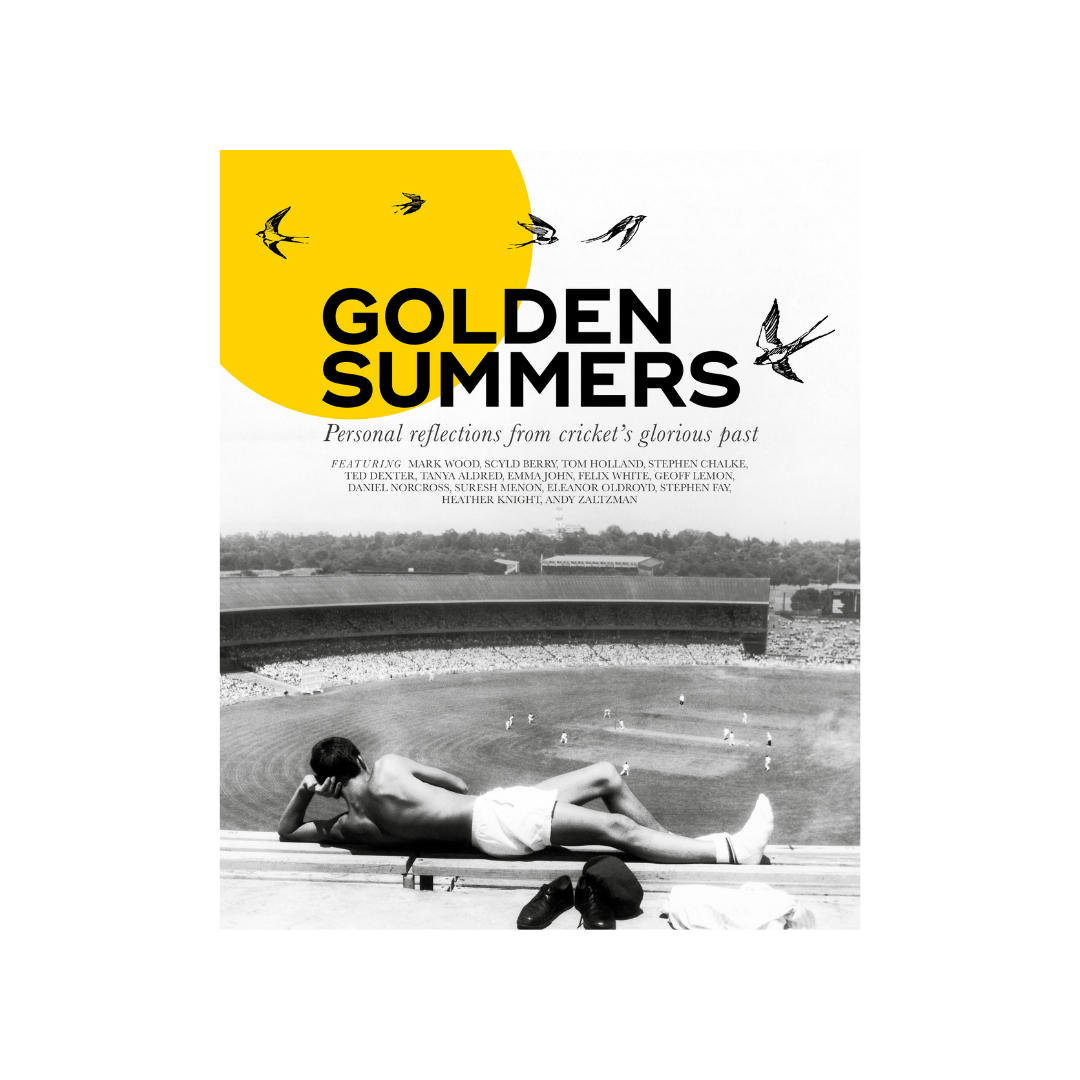