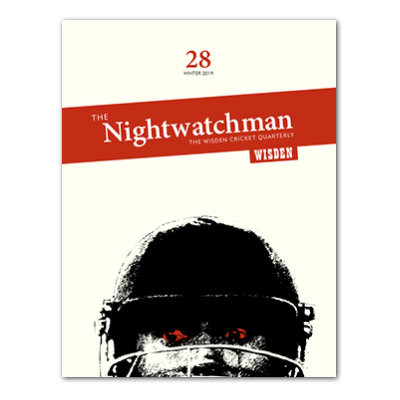 Winter has arrived once more and for us here in England, while it is less likely these days to mean huddling under the blankets with a transistor radio pressed to one ear, following the fortunes of the national side does still make for long nights and the acceptance that regularly nodding off at your desk is a price worth paying.

Unusually, and in a clear a marker as any of the workload our elite players are expected to shoulder, three tours take place before the English season swings into action once again. England travel to New Zealand, South Africa and Sri Lanka to participate in a bewildering array of T20Is, ODIs and Tests, some as part of the World Test Championship, some not.

Here at The Nightwatchman, we are less concerned with the hurly burly of the modern game and its focus on the wins and losses columns, and more interested in the stories, the characters, and all of the tiny things that make cricket what it is. That said, we are not totally blind to what is happening in the cricketing calendar, and this issue features pieces that cover New Zealand, South Africa and Sri Lanka, two of them focusing on grounds at very different stages of their development, another on South Africa’s former captain Hansie Cronje, disgraced in the eyes of many but still retaining hero status among many in his homeland, and another relating how Sri Lanka’s geographical situation as the perfect destination for a whistle-stop tour helped them to become world champions. We look back too, with the clarity distance provides, at the summer of 2019, with Marcus Berkmann opening up his cricketing diary for us while Oscar Ratcliffe wonders whether 2019 really was 1981 all over again.

We also have pieces centred around cricketing colossuses, as Tim Wigmore and Freddie Wilde dig deep into the numbers to explain just how extraordinary a performer Chris Gayle has been in Twenty20 cricket, while SM Hussain shares a poignant interview with the great leg-spinner Abdul Qadir, who died in September. A third great is present through family connections, Bill Ponsford’s grand-daughter Megan having sent across a lovely piece about a little-known Australia tour of India in 1935–36, while a fourth also features, although this particular version of Brian Lara is somewhat pixelated.

We tackle the big issues as well. Tasneem-Summer Khan makes her Nightwatchman debut with an impassioned piece covering the inequities and inequalities surrounding the treatment of women in and around the sport; Rod Edmond decries this country’s hostile environment, which like as not contributed to the death of former Middlesex bowler, Jamaican-born Wes Stewart; and Anthony McGowan covers the biggest issue of all, whether to walk or not, enlisting the help of the greatest thinkers of all time.

Finally, I have been wanting author (and Authors’ teammate) William Fiennes to write for The Nightwatchman for some time, and it has been well worth the wait. His piece on wicket-keeping is as fine piece of writing on cricket as I have ever read.

And meanwhile, if you would like to write for us or just let us know what you think about The Nightwatchman, good or bad, please get in touch at editor@thenightwatchman.net. We read every submission (but promise nothing) that fulfils our criteria: that articles should touch on cricket (however tangentially) and are original, well written and thought-provoking.

Issue 28 of The Nightwatchman is out now and available to buy in a digital version here and in print here.