Click the cover to read a sample of issue 31 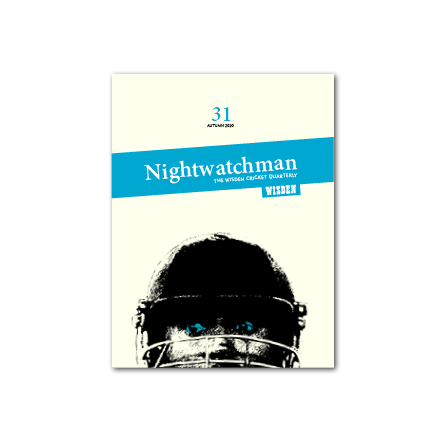 Issue 20 of The Nightwatchman is out now and available to buy here.

The 20th issue of the Nightwatchman represents a full five years of writing around and about cricket, comprising some 400 essays by 240 different writers and totalling a million words (give or take).

Among our ever-expanding stable of writers we can count librarians, paleontologists, prime ministers, poets, historians, priests, novelists, mathematicians, professors, stand-up comedians, parliamentary sketch-writers, economists, rock stars, teachers, TV and film producers, Wisden Almanack editors and international cricketers past and present. Our church is a broad one. And we’re mightily proud that pieces between these covers have spawned four books, two of them prize-winning.

This issue is no different in terms of range of writer and subject. With the Ashes well under way, we major on Australia, stopping off in the barren countryside where so many Aussies learned to play the game, and in Melbourne where Jarrod Kimber talks us thorough his cricket-obsessed childhood, as well as taking a look at prejudice in Australian cricket of the 1970s and ’80s. We also touch down in South Africa, from where Luke Alfred updates us on the stuttering progress of the country’s proposed T20 league, and to complete our round-the-world trip, Alex Massie shows us a region of Pakistan just ten miles from the Afghan border. Our photo section reinforces the theme of travel, detailing how players used to cross the world for the Ashes in the first half of the last century.

Elsewhere, Marcus Berkmann extols the joys of cricket trivia, Simon Barnes gets in the zone, and Jonathan Liew looks at the game’s macho language, while Nicholas Hogg turns art critic and Stephen Bates tells the tale of the brilliant Kent spinner Colin Blythe, killed in the First World War 100 years ago. Kamran Abbasi says there are more important contests than the Ashes for Pakistani immigrants in Britain, and Isabelle Duncan watches the world’s oldest international cricketer go up in a Tiger Moth to celebrate her 106th birthday. And there is more – Ultimate Frisbee, a long walk to Lord’s in the middle of the night, and memories of a magical MCC v Rest of the World game in 1987 to name but three – to keep you awake until play begins down under. Happy reading…

If you would like to write for us or just let us know what you think about the Nightwatchman, good or bad, please get in touch with us at editor@thenightwatchman.net. We read every submission (but promise nothing) that fulfils our criteria: that articles should touch on cricket (however tangentially) and are original, well written and thought-provoking.