Click the cover to read a sample of issue 37 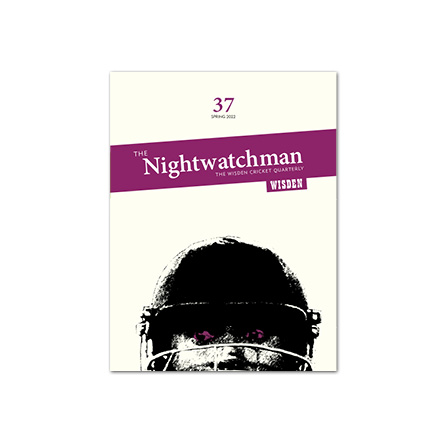 The eleventh issue of The Nightwatchman is out now. This issue may, using batting order parlance, be last man in for our first XI but we trust its contribution to the total will be no less significant for that fact – indeed, we’re confident it is full of runs, and stylish ones at that.

We cover a lot of ground – from late-18th century shenanigans involving an unsporting sporting priest, on to WG (100 years dead this October) and his influence from beyond the grave, through to the Golden Age, to an early-20th century poet, to a tragic accident on the village green in the 1930s that bears a striking resemblance to Phillip Hughes’s untimely death last year, and on again to two West Indians of the mid-20th century – one executed, one writing intriguing letters on a tour of the UK – and finally to the present day, where we feature blind cricket, the difficulties of being Pakistan captain, the boorishness of the Aussie male, and the very personal story of how a cricket journalist came to make a film about Test cricket entitled Death of a Gentleman while his mother was steadily losing her battle with cancer.

On top of all that, we have two pieces – written by men who have each clocked up over 30 years of journalism and more than 20 books – that combine cricket and the act, or even the art, of writing. Firstly, Simon Barnes extends the seven-plot theory to cricket, and talks us through each of the story types with examples from the game, contending that: “time and again, sport repeats our most ancient tales and reconnects us with one of the things that defines our humanity: we tell stories. We are a species of fabulists and that is why sport is a fabulous thing.” And then Gideon Haigh gets all meta on us, writing about writing while sitting at the other end of the table from Mike Atherton, who is also writing. It’s worth reading.

And at the end of another Ashes contest (we make that three in our two and a half years as a publication) we showcase some rarely-seen photos from the vaults that go way, way back, to a time when the game was so different, and yet still the same. That’s why we love it so.

If you’ve not done so already, you can order your copy of Issue 11 here.