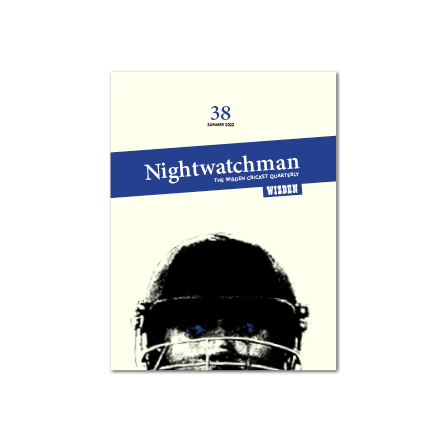 Issue 22 of The Nightwatchman is out now and available to buy here.

It was all happening 50 years ago. War in Vietnam, the assassination of Martin Luther King and Robert Kennedy, the Prague Spring, Enoch Powell’s “rivers of blood”, Tommie Smith’s gloved right hand reaching for the skies at the Mexico Olympics, students rioting in Paris. And more. The maiden flight of the 747, the first manned Apollo mission orbiting the moon, an interrracial kiss on Star Trek, the White Album, Big Macs consumed for the first time, and Dutch Elm disease wiping out millions of trees. Turbulent times indeed.

And in the UK came a welcome revolution in domestic cricket as the Advisory County Cricket Committee relaxed the rules on overseas professionals, allowing each county to appoint one to bolster their team. One small step it seemed, one huge step it turned out to be.

The arrival on the scene of Garry Sobers, Mike Procter, Barry Richards, Clive Lloyd, Farokh Engineer, Majid Khan, proved transformational. These trailblazers would be followed by many more, making the English county game impossibly glamorous and infinitely better. Their names are as familiar as nursery rhymes – Viv Richards and Joel Garner, Imran Khan and Garth le Roux, Richard Hadlee and Clive Rice, Malcolm Marshall, Sylvester Clarke, Gordon Greenidge, Michael Holding. And so it has continued – overseas stars altering the fabric of the game in this country, and the make-up of the England side, forever.

Further changes have come of course. No longer will an overseas player become a long-time and well-loved county servant – the days of Mushtaq Ahmed, Darren Lehmann, Courtney Walsh, Saqlain Mushtaq, Wayne Daniel, Waqar Younis, Mark Waugh, Carl Hooper, Ian Harvey, Bishan Bedi, Wasim Akram or Shane Warne pulling on their well-used county sweater every April are long gone. But every lover of county cricket has their favourite, the player who caused them to fall in love with the game.

We asked a number of writers to take overseas players as their theme and see where it led them. Jon Hotten goes all the way back to 1968 to look at a trio of South African arrivals, including the love of his cricketing life, Barry Richards. Simon Wilde contends that the influx of foreign players changed English cricket forever, while Harry Pearson looks at a few players who might not have become household names but were effective nonetheless. Majid Khan, Richie Richardson, Carl Hooper, Imran Tahir and Ole Mortensen all get plenty of love while Alan Butcher reveals exactly what it was like to play alongside Sylvester Clarke.

Meanwhile, both Simon Barnes and the Reverend Robert Stanier look at the recent troubling events surrounding “sandpapergate” and Owen Cameron traces Australian sportsmanship, or lack of it, all the way back to Don Bradman.

Elsewhere, we have two stories connected by Penshust but separated by more than a century, Matthew Engel reflecting on cricket coverage today, and two pieces on Pakistan, the current tourists to England. All in all, plenty to get your teeth into.

If you would like to write for us or just let us know what you think about the Nightwatchman, good or bad, please get in touch with us at editor@thenightwatchman.net. We read every submission (but promise nothing) that fulfils our criteria: that articles should touch on cricket (however tangentially) and are original, well written and thought-provoking.